I’m getting tired of the knuckleheads on Capitol Hill wasting time parading oil executives into hearing rooms to pummel them over profits every week rather than actually solving the problem. Isn’t this still America? Aren’t we still a capitalist nation? A quick lesson on the purpose of a business: to make money. Yes, it’s that simple. The purpose is no greater or less than that. We should be cheering their profits.

Let’s say I were to grant you that a corporation could make “too much” money (I won’t, but let’s say I did). The oil industry has a profit margin well below the average of all industries. The reason for the huge profits in absolute numbers is simply the fact that it is the largest industry in the world. It would be like Joe’s Bar & Grill complaining that Applebee’s makes too much in comparison.

Anyway, let’s move on. Let’s take a look at what the mental midgets in Washington have done to address the issue of high oil prices:

And they’re asking the oil executives why prices are so high? Stop the political grandstanding and provide real solutions folks.

Every once in awhile, when I’m driving down the road, I decide to go on a murderous rampage. In particular, this happens when someone doesn’t signal a turn, cuts me off, drives 10 miles per hour under the speed limit, etc. When things like this happen, I stalk the offending party. I will follow them until they make a turn or go around a curve. Then I bump the back of their car so that they spin out of control and slide off the road. It’s a bonus if there happens to be some kind of drop off; that way, the car rolls down the embankment and the folks are killed in a spectacular, explosive fireball. It’s a very satisfying form of revenge.

Today, this jerk passed me and cut me off. I was pissed. I put my road rage hat on and followed for a couple of miles. Soon, we were coming up to a curve. Even better, there was a nice drop off on the other side of the curve, so I would get my ultimate reward of the fiery crash. I zoomed up on the car–ready to inflict my punishment. Just before I was to hit the car, to my horror I saw a Baby on Board sign in the back window. Crap. I may be a killer, but I’m not a baby killer. I backed off and took a deep breath to calm myself down.

Seriously folks, why do people waste their money on a stupid little sign (most likely made in China by the way) announcing to me that they have a human less than a year old in the car? Don’t get me wrong, I love babies. But when I’m driving or doing anything else, I don’t put any less value on the lives of people that are not babies. All life, young and old, is precious.

But wait, maybe we’re on to something here. Let’s turn this program around. Let’s mandate signs for those that we do want to exterminate. (Pay no attention to the fact that this contradicts my previous statement about all life being precious). That way, they are clearly identified so that we can run them off the road to die in fiery crashes. Here are some good starter ideas:

What do you think? Yes, the good ideas to improve life in the USA just never stop here at DITH.

Well, strap yourselves in. It looks like gas prices may be headed steeply higher over the next several years. It would really save me some time if I could just have my paycheck direct-deposited into the oil companies’ bank accounts. I’ll have to check into the feasibility of that and get back with you. Meanwhile, reason #160 that this country is doomed: cheap cars in Asia. 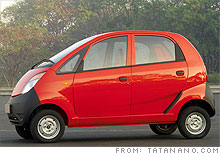 Indian automaker Tata has introduced a 2-cylinder, 4-passenger car that will retail for $2,500. With the rising incomes and the introduction of cheap cars like this, automobile ownership in Asia is expected to skyrocket over the next several years.

There are 2 billion people in China and India compared to 300 million in the US. While these cars are extremely fuel efficient, the sheer number of new cars on the road will sharply increase demand for oil when supplies are already tight.

But just look at the car. It’s a death trap. But hey, it will save on burial expenses. The car can easily double as a casket. They will be able to dig a hole and just place the car (with deceased occupants inside) in the grave.